New content efforts have been trucking along nicely and I’m getting close to being able to release a substantial content update to the Steam Early Access version. If you prefer not to have new bosses or content spoiled for you, stop right here! For the rest of you, continue reading…

Level Design Additions for the Graveyard

This is bad when I can’t remember the literal name for a zone in my game! Either way, “World 1” is getting some new rooms and also will be the first place you encounter ladders in the game. 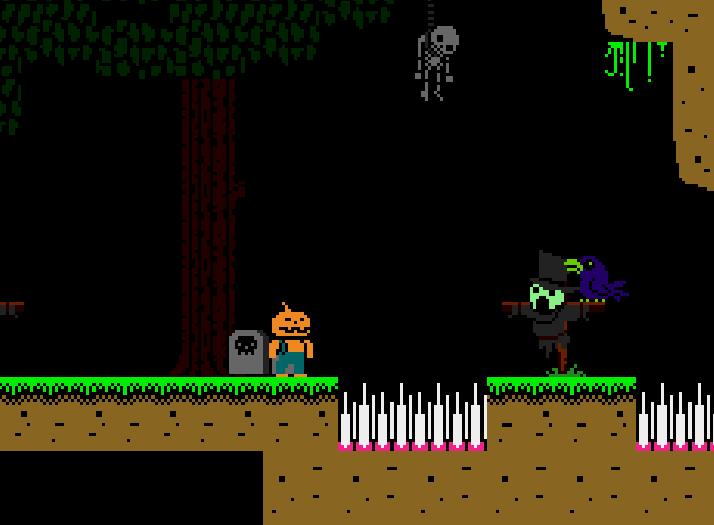 Check out those purple crows! They’re another proximity-check enemy (similar to what I’m doing with chainsaw maniacs and mashers). In doing them I learned a slightly more elegant way to check a distance radius vs. the player instead of doing a wide clumsy sweep for collision (will be helpful for future things. 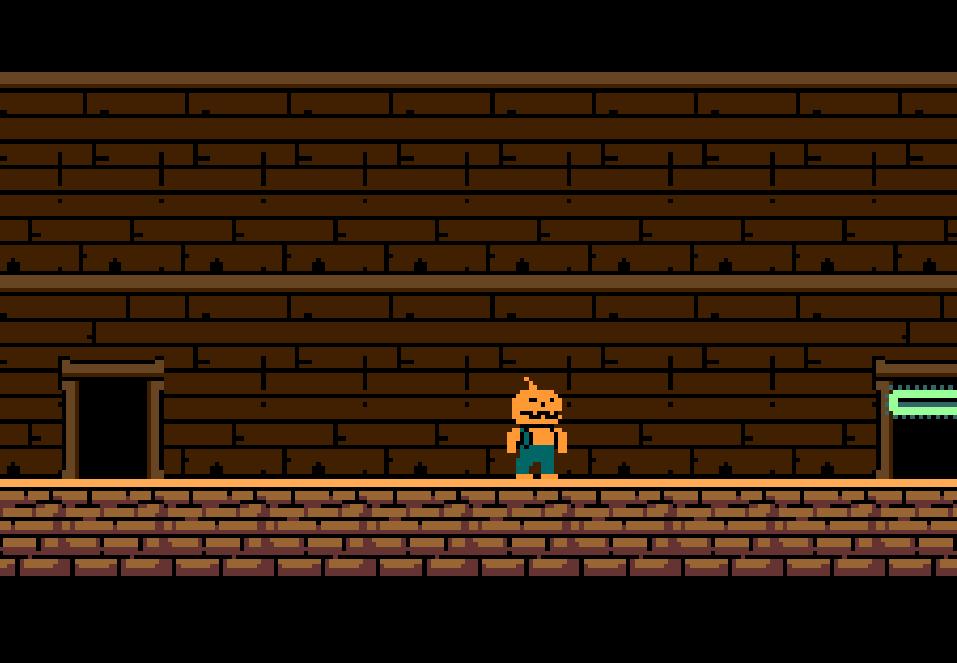 Here comes the giant chainsaw maniac ready to carve your pumpkin in a most dangerous way! I intended to make him the Graveyard miniboss but he might swap places with big bat to better pace out challenge ramping. It will take a little more testing from people and finding out their first experiences versus him, but so far giant chainsaw maniac seems like a good, tough boss challenge.

Bloody Mansion just screams “give me some cool tricks and traps” to me so I’m trying to oblige. We start to do some fun things with fall away platforms here. 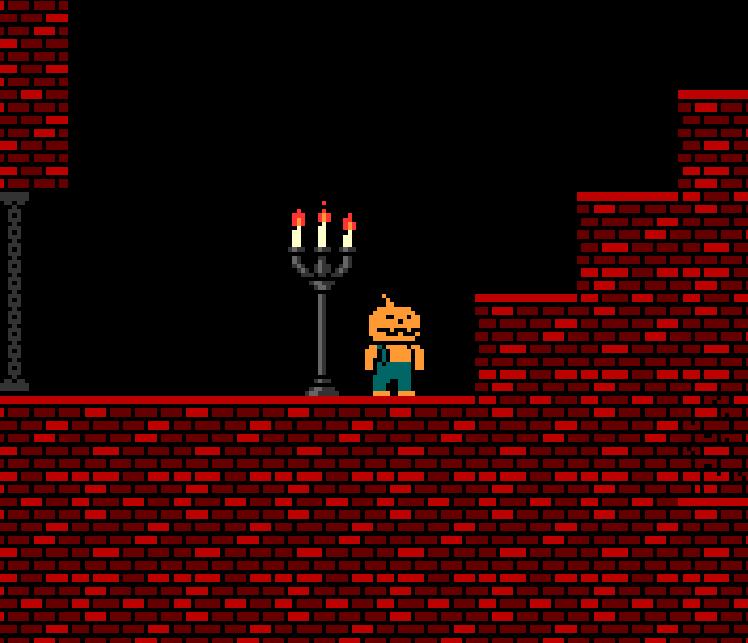 And also there are going to be some nice decisions to make about how best to navigate deadly ladders like this in the same room. 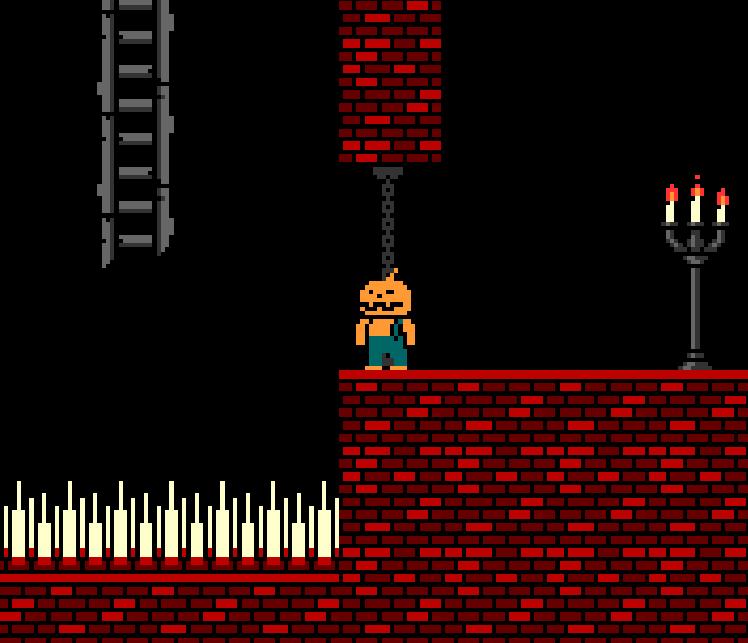 The new miniboss for Bloody Mansion is the fearsome two headed hydra! 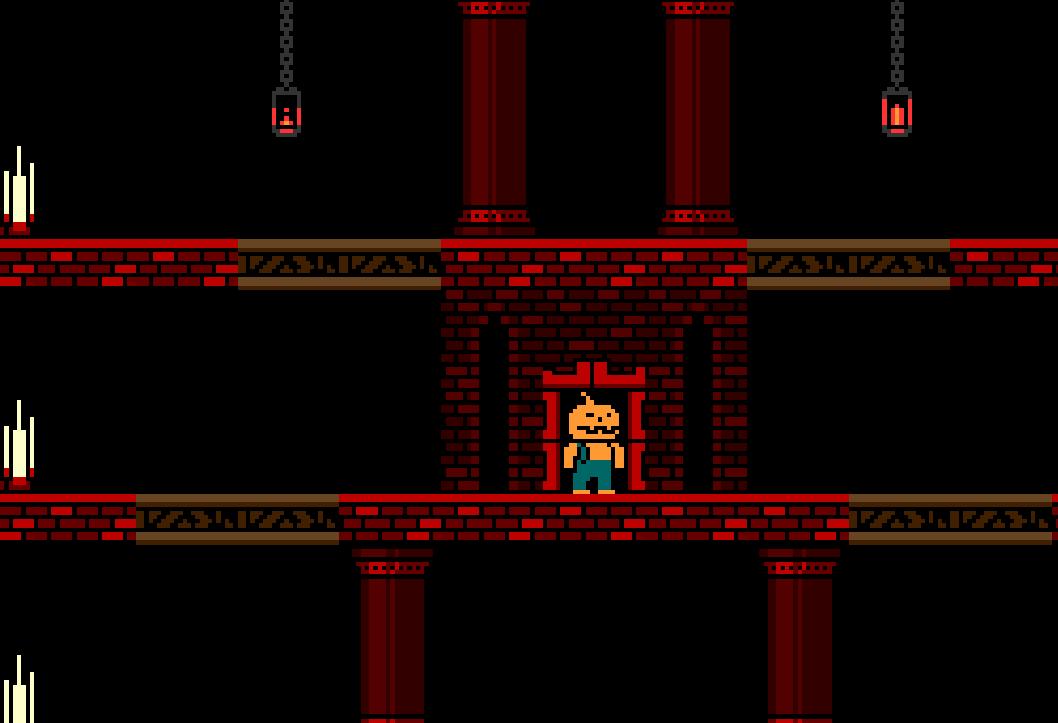 Careful navigation of the drop through platforms and watching out for floating hydra heads that enter the scene is key here. 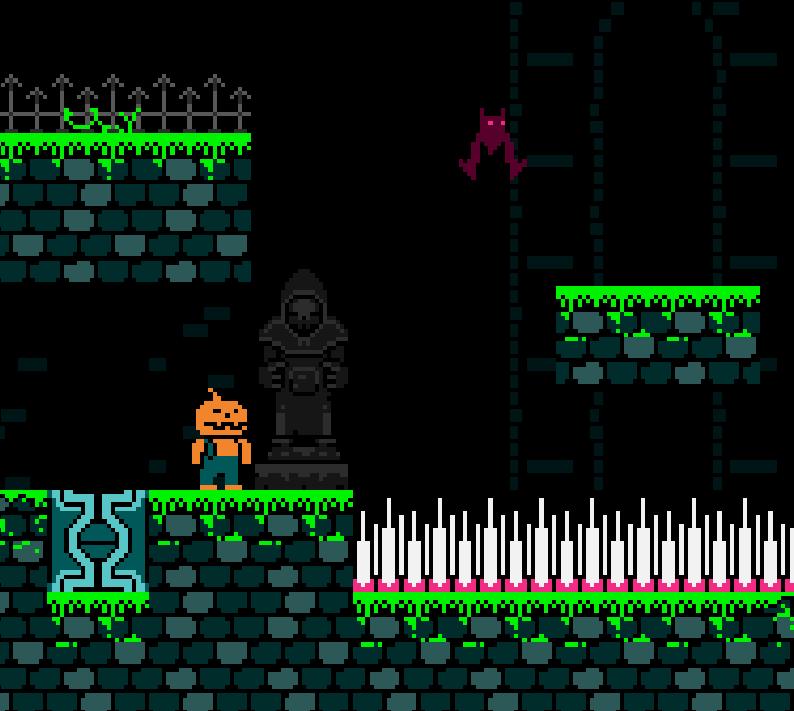 I’ve been adding a few different wall tiles and decals to spruce up some of the level locations. The necromancer statues give a fun clue as to who you wind up facing at the end of Forgotten Stonehenge.

I’m really happy with how the eyeball skull miniboss came out.

Watch out for his giant exploding eyeballs!

Other Improvements and Incoming Features

I’m going to bullet list some of the other things that are going on that don’t necessarily have images to accompany them.

At the end of boss fights, instead of triggering a room transition at the end of the boss death, I’m introducing a new door that players can enter to go when they are ready. This gives me some options for timing and trade offs like creating a power up that players can grab before moving on. In general it just feels better for player agency.

When you transition from room to room, the immediate transition has always bugged me. It’s too snappy and if you start a new room at a different visual position from where you ended in the previous room that can be jarring. I put in a simple graphic transition effect that adds a nice visual break point to moving into a new room. Going to be working on a “walking into a doorway” state for Pumpkin Man to add a bit more polish to events like this.

I started the framework for getting alternate player characters in the game (read: Butternut Bro). It’s going to require a character select menu, new player skins, and wrapping your selects / unlocks into the save file but I want to have the start of this in for the upcoming Steam update. This and wrapping up Forgotten Stonehenge rooms are what I’m working on next.

Hope you enjoyed checking out the updates! Check out Halloween Forever on Steam! store.steampowered.com/app/425650
Also come join me on Twitch when Iâ€™m streaming gamedev or playing games! twitch.tv/imaginarymonsters